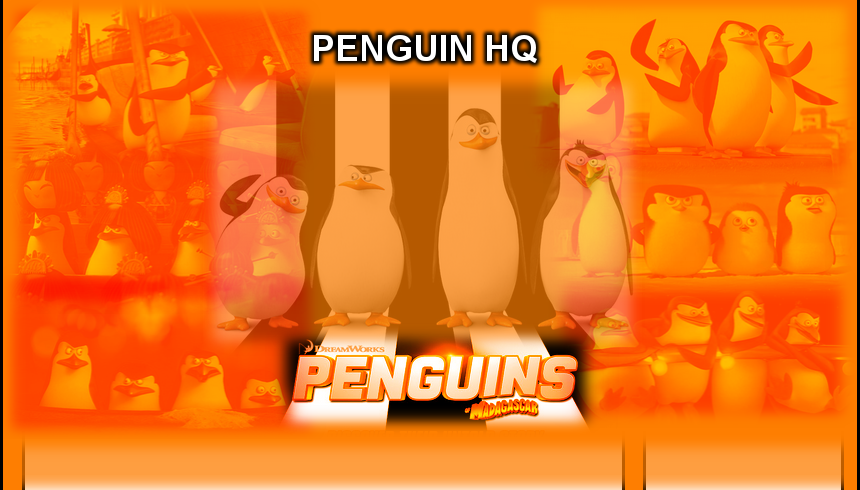 Welcome to Penguin HQ, The small but growing Penguins of Madagascar Fan-Site. The site includes an Episode Guide for all three Seasons, profiles on The Penguins, and a Schedule that shows past airings. Through out the years, I've added picture galleries, music videos, motivational posters, and more! Hope you enjoy your stay at Penguin HQ! ~ Icy

Hello there! :D Since Majhost still doesn't want to come back to the world of the living.. I decided to restore as many images as possible but there are sadly a good bit that are still broken but most have been restored. I never ever thought that site would end up falling to it's death and never thought of making a back up folder for every single image on Penguin HQ so that's why only most of the images have been restored. I believe Majhost to be dead since it's already 2016 and it's still 'down for maintenance' Maintenance my penguin butt! More like 'We're dead. Sorry.' >-> It's dead but that doesn't mean it'll be like this forever for nothing lasts forever. It'll come back, I just have to be patient, even if it takes years to wait. Here is a list of which images have been restored: 'Site Archives'; Version 3 thumbnail, Version 3 Private Avatar, Version 4 Avatars, Movie Poster thumb, Movie Poster full view. 'About'; Image has been restored. 'Pictures'; Skipper Gallery thumb, Kowalski Gallery thumb, Rico Gallery thumb, Private Gallery thumb, all images from every gallery has been restored. That is it and by the way I was sadly unable to restore nothing from Version 2.1 :/ and other stuff that isn't in the list. I was also able to restore all of the AMVs in 'Music Videos' since I found out that Vimeo, the site that hosts the music videos have all been removed since my account got deleted by copyright. Later on I made a second account to try using a copyright claimer thingy and paste it in every video in the description part. Now I find out that that using that trick didn't work since I checked to see how the videos are doing on another site and find out that every video that was on that account has the stupid 'Sorry. This video has been removed.' crap T-T Jeez, if things weren't bad enough with the 'wonderful' and 'awesome' Majhost still showing no signs of making a come back.. There was only one hope for the music videos now and that was to upload them on Photobucket (despite the low quality it provides) since videos that I uploaded back in 2009 or so are still there, so that's what I did. Low quality but at least it lives again, better than not ever seeing them online again because for plain B it would make them download-able only.

I have not only restored stuff but I have also added some new pictures that saved years ago on to my Penguins of Madagascar picture folder and during Version 4 I talked about making a bonus picture gallery called Others and decided not to do it. So, I added the pictures to the Group gallery instead and that gallery has 11 new images :3 Since this happened I have included one new picture for Skipper's gallery, Kowalski's gallery, Rico's gallery, and Private's gallery. That's all for the new additions and sadly no more will be coming since I said before about loosing interest in updating Penguin HQ but it was fun while it lasted ^-^ Even though this is my last update I will check the site out once in a while, this site was suppose to be small to begin with and even though I said that it would grow, it hasn't grown that much. I could add a page about the new movie but I don't have that big of an interest to add such a page. It has been almost a year since I seen the movie, I first saw it in theaters and watched it online later on. I still favor the elite penguin team but I don't have enough love for them to add anything on here but I had just enough to make this last update. I couldn't let this site live on without any restoring at all, it just isn't me. Back to the movie; It was amazing and all but I didn't have enough love to get it on DVD. The past me, the one who was crazy about them, wouldn't have any doubts about owning that movie but the present me is. Nowadays I'm into much of the teen anime stuff like Blue Exorcist and that I got into yet another new anime lol one that I got into that exact month. Which was mentioned in the latest update during the 4th layout. Sorry Penguins of Madagascar fans but Penguin HQ is slowly coming to an end... though the site will ALWAYS stay open. I DON'T plain to close it at all :D Yay! And so as this update comes to a close I say; Thank you everyone for visiting Penguin HQ and goodbye! :')

PS: Even though I don't plain to close Penguin HQ my site host, Webs has this stupid rule that if I don't log into my account for two years the site will either have a page saying that it's frozen or will have a page saying that this page is unavailable or something similar to it (Since this rule is new I'm kind of fuzzy on the details..). Lol, hosts these days.. you love them, then they turn or almost turn your back on you..

New Layout! And It's Awesome! :D

I REALLY like how this awesome layout came out and I even blended the images over each other because I ran out of width room :D This layout is a lot better than Version 4! The content on that layout didn't have much room at all so I made it bigger in this layout C: As I said in the last update For the future, next year in 2015, I plain on making a new layout that will use random screenshots from the Penguins of Madagascar Movie ^-^ since I found so many on Google :O and KABOOM, a layout based on the movie :3 With this layout, I added two new things; a new header for the content and I added a lot of the text shadow effects that I learned a while ago. For the banner, I blended many images together :D and used the glowing text in Gimp for the site title but for the version title, I used text shadow since black font and black shadow didn't work on Gimp.

For other updates than the new layout; I added a new page 'About This Layout' that tells a lot more about the creation of Version 5 and shows the rest of the update avatars that I'll be using for the future. I also added Version 4 to 'Site Archives' but I couldn't add the update avatars since Majhost, my image hosting site is temporary down for 'maintenance' along with a bunch of other images :/ Not to worry though, Majhost will be back. It does this every now and then but it always comes back. Until Majhost returns, I can't make any more updates other than this. Icy out!